The Best City for Vintage Clothes in the UK

In recent years, the vintage scene has been thriving. Consumers are getting tired of wearing the same clothing as everybody else, and are looking for unique vintage pieces in order to stand out. British app Depop, a social shopping platform, was founded in 2011 and now takes over £30 million in sales each year. Depop has become a hive for vintage lovers, as you can buy and sell clothes directly from your phone. On top of this, we have also seen an increase in documentaries over the past few years which aim to educate consumers about the impact they are having on the environment, therefore making vintage finds more desirable to ethical consumers.

The release of “Tidying Up with Marie Kondo” on Netflix has also inspired the nation to declutter their homes and get rid of items which didn’t ‘spark joy’. Some charity shops have claimed to have a significant increase in donations since the show began streaming. Scope, a disability charity, tweeted about their increase in donations thanks to Marie Kondo. With donations, environmental concerns, and a consumer that desires unique clothing, now is the perfect time for vintage clothing finds, and charity shops are the perfect place to start looking.

Aberdeen was the standout for vintage finds, with a low number of charity shops but a high disposable income. This means that the likelihood, and ease in finding a rare vintage item, is more likely than any other city in the UK. 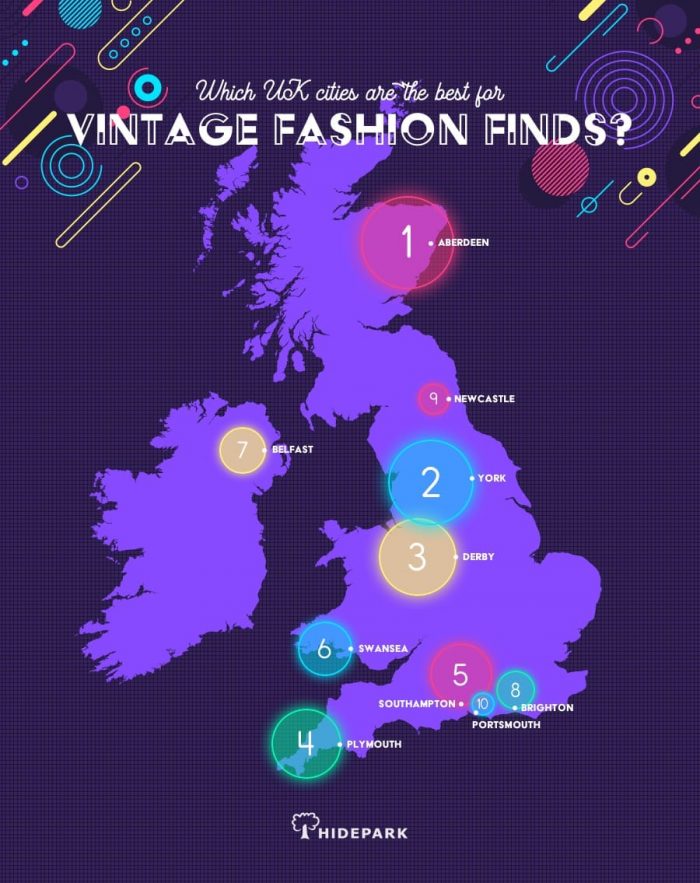 We spoke to local Aberdeen blogger Jules Brander, the founder of Jules and the Crown, about the Scottish city’s vintage scene: “Aberdeen has a great variety of second hand, vintage and charity stores meaning that there are plenty of treasures to be found. Stores such as The Closet are full of hidden gems and unique pieces that you couldn’t find anywhere else, or in a typical high street store. Every city is different for clothes shopping but Aberdeen has a great mix for everyone – boutiques, high street chains, shopping centres, vintage and second-hand stores. It may not be the biggest city, but there’s a great selection of unique stores for its size and population that the area is home to.

The Closet is my go-to place for vintage in Aberdeen out of all shops. Here, you’ll find everything from much-loved designer dresses and skirts to luggage and accessories. It’s the kind of place you can get lost in. I love it.”

York actually had less charity shops than Aberdeen at 16, but the city’s average household disposable income sat at £3,000 less at just over £18,000.

Large cities such as Nottingham, Coventry and Liverpool were found to have less opportunities for vintage finds as they have such a large number of charity shops as well as being in the bottom 10 for disposable income. This makes finding vintage items more difficult, as you’d have to hunt through over hundreds of charity shops.

We may be biased, but we know that leather jackets are a timeless vintage classic and a wardrobe staple. In the 1950s, Hollywood stars such as James Dean and Marlon Brando helped to solidify men’s leather jackets as the ultimate bad boy symbol. The Beatles wore leather jackets in the 1960s, and the 80s saw the release of Top Gun with Tom Cruise in that iconic leather bomber. Fast forward to the present and the leather jacket is still a staple in everyone’s wardrobe. At Hidepark, we have a range of vintage styles available, just check out our range of men’s and women’s leather jackets.

Below are the results of our research and the scores of each individual city.

Homepage > Blog > The Best City for Vintage Clothes in the UK