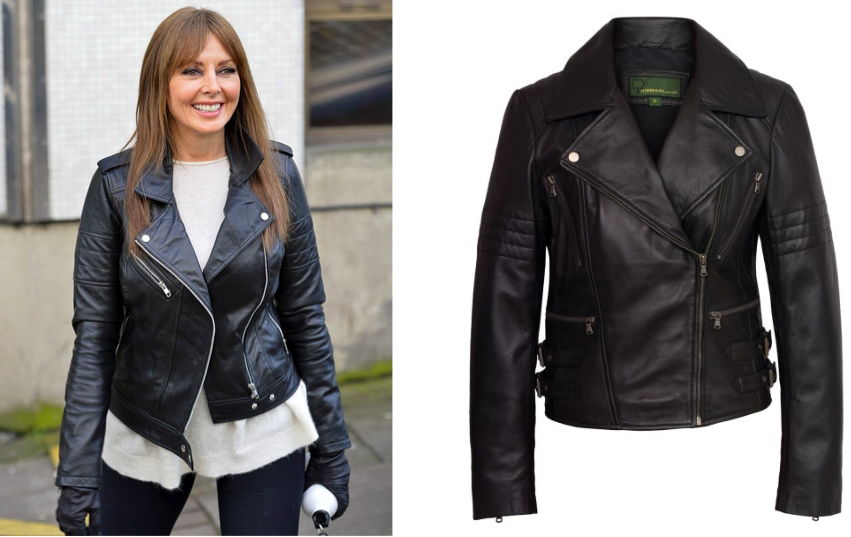 Let’s be honest, if you catch sight of someone with untold fame and fortune wearing the same outfit as you, it gives you a sense of pride like no other. Celebrities have to pay attention to how they look, being in the public eye so often, so if they’re wearing it, it must be the height of fashion, right?

We certainly think so, so that’s why we’re taking another look at what celebrities are wearing at the moment, and helping you match their style with one of our many leather jackets here at Hidepark.

Tom Hardy has become one of the most recognised and prolific actors of our time, after starting out as a male model back in 1998. Working on everything from Academy Award nominated movies to reading bedtime stories on CBeebies, his is a face that many are familiar with, and he’s loved by all.

His looks and charm have turned him into something of a style icon, and we really can’t argue with that. Here, in a photoshoot for Esquire, he showed of this rather fetching shearling sheepskin leather jacket, complete with fur-trimmed cuffs and hem.

If you want to achieve the same style, we’d recommend our B4 Sheepskin Flying Jacket. You can wear it open, like the ruggedly handsome Tom does, but it looks just as good fastened up.

Known primarily for his work on The Wire and Luther, but equally as accomplished in the film industry, Idris Elba is another actor that just oozes style and charisma. Nobody looks as good in a suit as Idris does, and the same can be said when he’s rocking a leather jacket.

And there’s plenty of reasons you might want to look like Idris. GQ Magazine’s 50 best dressed British men. People Magazine’s 100 Most Beautiful People in the World. Essence Magazine’s Sexiest Man of the Year. These are not to be sniffed at, and just cement how much of a style icon he’s become.

Here, he’s seen wearing his very own IdrisTM Jacket, but you can just as easily recreate his style with the Budd Mens’ Leather Jacket right here at Hidepark!

Say what you will about hot-headed Michelin Star chef Gordon Ramsay, but there’s no denying that once he’s changed out of his chef whites, the man has style.

Another regular occupant of Sexiest Men Alive lists, Gordon’s style is one that is distinguished and distinct, and he looks great in a leather jacket to boot.

Seen here out-and-about in a casual brown jacket, it’s easy to see why he’s loved by so many. If you’re wanting to steal the style of the most recognised chef in the world, why not try our Franco Mens’ Leather Jacket in brown (also available in black)? This month it’s been reduced to £125 as one of our season specials.

After appearing on Sex and the City as fashion journalist, Carrie Bradshaw, Sarah Jessica Parker quickly cemented herself as a fashion icon as well. Similarly to her character in the show, Sarah has always had her finger on the pulse when it comes to what looks good, and has been the face of many brands because of this.

When not on the red carpet, Sarah is regularly caught wearing one of her many leather jackets, cementing it as a necessity within any person’s wardrobe.

If you want to recreate her look here, you can’t go wrong with the Lena Leather Flying Jacket. With it’s removable fur collar, you can instantly transform it into a jacket worthy of Sarah Jessica-Parker herself. It may not be the same colour, but brown is in this year, and we personally think it looks better anyway…

Anne Hathaway is definitely no stranger to leather, having played the leather-clad Catwoman in The Dark Knight Rises, and it seems she’s carried this love over into her own personal style as well. She can be seen here, taking a stroll with her husband, wearing a classic biker-style leather jacket.

The effortlessly beautiful Anne has been loved by millions since her film debut in The Princess Diaries, and a close eye has been cast over her style choices ever since.

If you want to recreate her style, we’d recommend our Wendy Leather Biker Jacket in black. The stitch detailing on the shoulders and open collars make for a remarkably similar look.

The incredibly intelligent (and equally as stylish) Carol Vorderman has been a favourite of the nation since her humble beginnings as co-presenter on Countdown. As the show gained popularity, so did she, and people tuned in to see her solve seemingly impossible maths equations whilst looking fabulous doing so.

She has gone on to host a variety of shows, including a several year stint on Loose Women, and has always been in the public eye because of this.

Here, she’s seen posing for photos whilst leaving the set of one of her many shows. If you want to copy her graceful but effortless style, we’d recommend the Lisa Ladies Leather Biker Jacket.