Leather can be made from the skin of all animals, including birds and reptiles, but is most often associated with cow or sheep hide. These types are the most common use in fashion and textiles, as different types of leather vary in how suitable they are for use in garments. For the garment to be sold at a commercial price the skin must be a byproduct of a domesticated animal reared for its meat.

The most popular leather for garments is made from sheepskin followed by cow, goat, buffalo and pig. The buffalo skin is from domesticated animals reared in Asia for meat and milk (used for mozzarella cheese). They are very closely related to our domesticated cows and their skin produces a leather that’s virtually the same. To a much lesser extent, deerskin is used from animals farmed for venison. Leather from a deer is very similar to cow leather.

Ostrich skin from birds reared for their meat and feathers produces leather with distinctive raised markings where the feathers have been removed. It is highly sought after in the luxury bag industry and only rarely used to make garments as a single, short jacket is often sold for several thousand pounds!

These are the most common types of leather made from different animals, showing how versatile leather can be as a material. As stated, practically any type of skin can be used to make most items normally made from leather, but the suitability and commercial viability vary greatly from animal to animal.

The processes behind different types of leather

If you’re interested in the general process that goes into leather-making, read our previous post before carrying on with this one.

After wool or hair has been removed from the skin, it is ready to be tanned and turned into a piece of leather that has the desired colour, finish and qualities.

There’s a practically infinite number of finishes and effects that can be produced on a piece of leather. DIfferent types of finish include matt and gloss, smooth and rough, plain and embossed, flat and shrunken, sueded and full grain, as well as combinations of these and many others. We’ve gone into more detail on some of the most common.

Sometimes referred to as Full-grain, this is the most common and traditional finish on leather. The skin is tanned, leaving the natural outer grain intact and producing a Nappa finish. 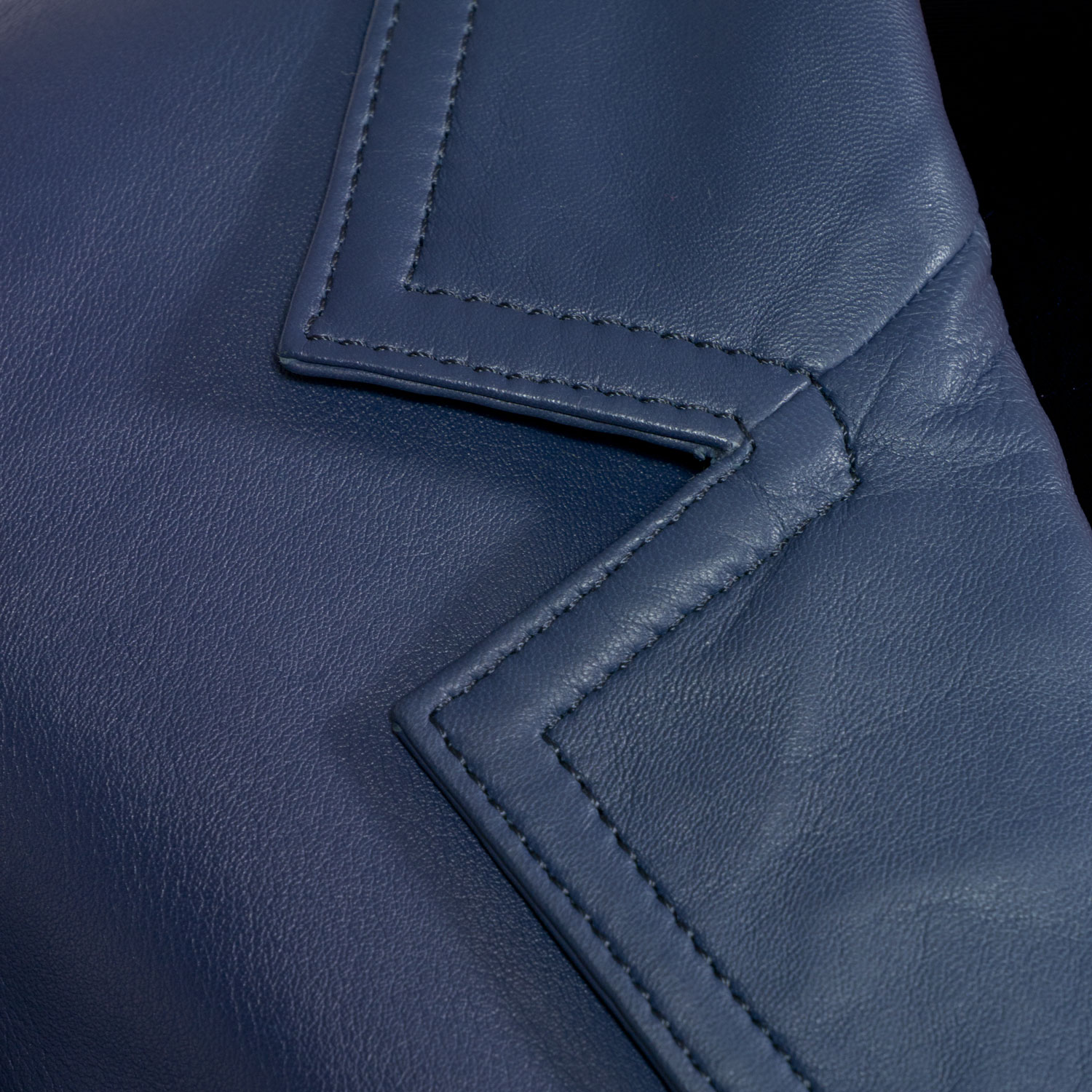 The leather can be drum dyed with a transparent dye which will produce a soft, natural, look and feel, though any marks on the skin could still be visible if untreated. By adding some pigment to the dye the surface will be a more consistent colour.

If a fully pigmented dye is used, the surface will have a very even colouring, but some of the natural texture and characteristics of the skin can be lost. A good comparison is that of using wood dye or gloss paint on a piece of wood – as the gloss paint would cover up the natural surface of the wood, pigmented dye covers the natural surface of the leather. A leather without any pigment is referred to as Analine leather, whereas a leather with full pigment is referred to as Fully Pigmented. Anything in between is Semi-Analine, but the end result can vary greatly in appearance.

Fully pigmented is the most durable of the three, so tends to suit jackets that need to withstand a bit more wear and tear. Analine leather is best when you want to retain the most natural look and feel of the hide itself.

To soften the leather or create a more grainy appearance the nappa skins are milled or tumbled. This is done by putting them into a large drum that rotates slowly and as the skins are being moved within the drum they soften.( as happens with normal wear) This is known as milling and the finished skin is referred to as Milled Nappa.

The length of time the leather is in the drum can vary to produce different effects and abrasive “beads” can be added to give the leather an even more worn/antique effect.

The inside surface of the leather is known as suede. When being used for a garment, suede will normally have come from goat, sheep or pig and will have a soft velvety feel and fine nap. This is due to the production method, as the underside of the animal hide is softer and more supple than other methods, such as full-grain leather.

A Nubuck finish is produced when the Nappa surface is buffed or sanded to remove the grain (the epidermis of the skin) and leave a very fine sueded surface that could be easily confused with suede. Generally, it is a tighter grain than suede and made from cowhide. 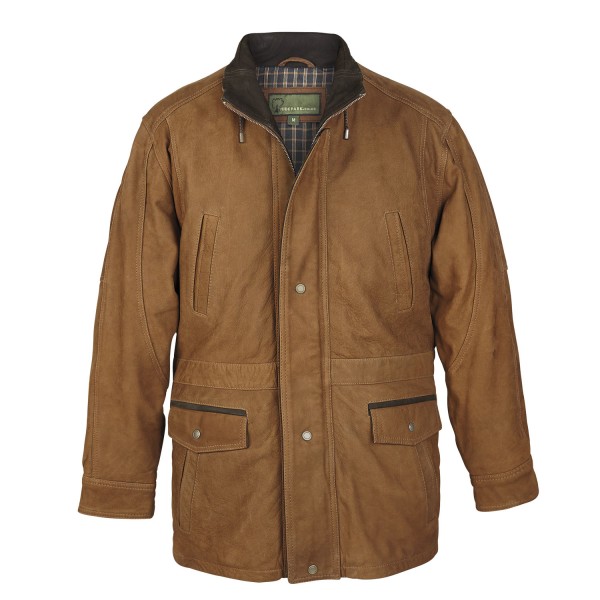 If only a percentage of the grain of the Nappa surface is removed, it will produce a two-tone texture and colouring. Areas where the grain has not been removed will have a shinier Nappa finish, whereas areas where the grain has been removed will have the matt Nubuck finish that’s lighter in colour. Varying the extent to which the grain is removed can provide virtually infinite different looks and feels for the finished product, so it’s important to find the type of finish you like the most. This is known as semi-nubuck and is normally produced from sheep Nappa. 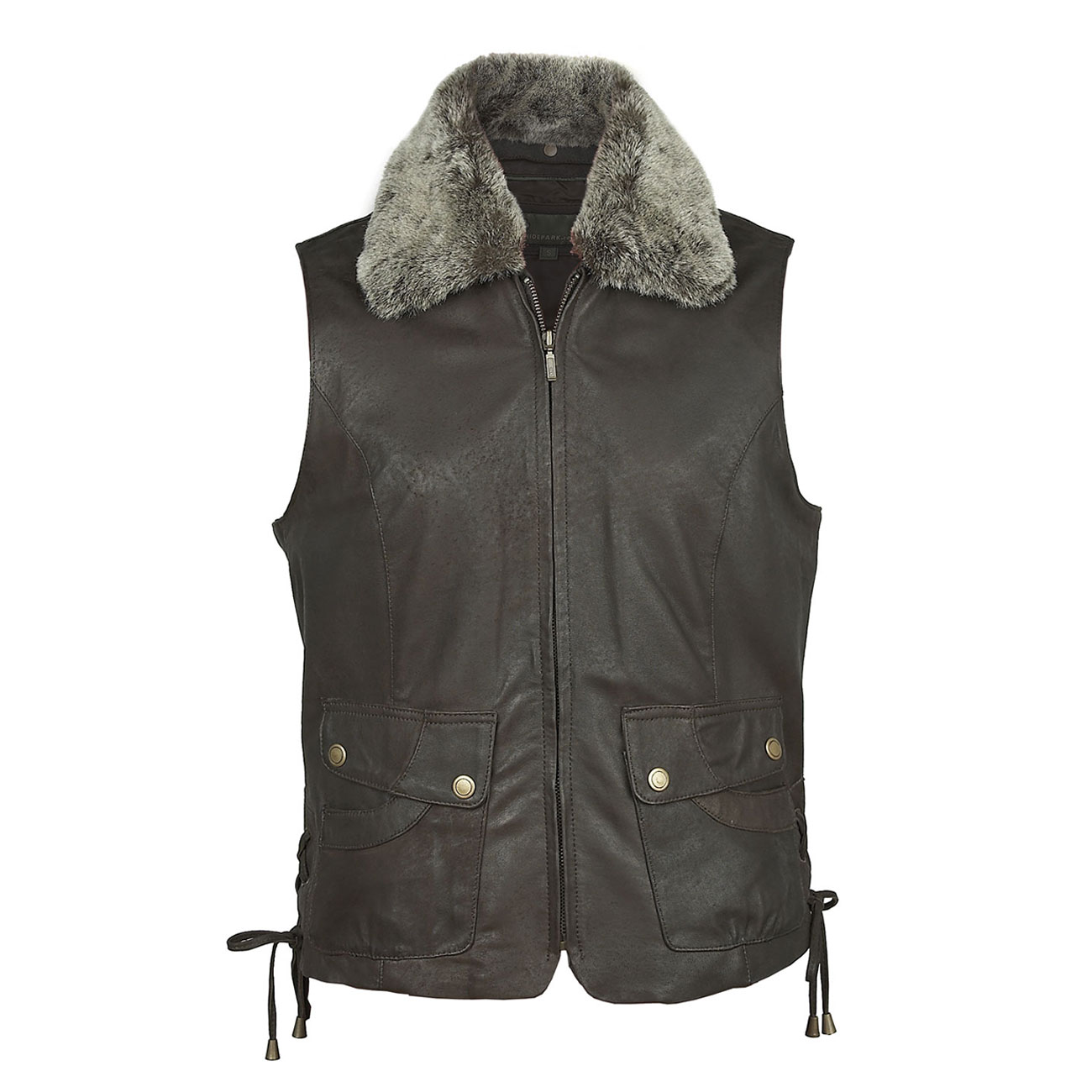 The aforementioned three finishes are the basic starting points from which you can then go on to produce a multitude of other looks and textures, depending on what the leather is required for and what fashion trends are dictating at the time.

Putting wax onto a piece of leather can really bring out the colour and textures of the skin. It can also produce a multitude of effects when applied to different areas of the hide. The wax can be applied by spray gun before production of the garment if an even look is required. Alternatively, it is applied by spray gun or by hand after production of the garment if a more shaded finish is required. The wax can also contain a dye to enhance the effect and produce a two-tone colouration. It is often simply applied to the seams to add character to the leather jacket.

If the garment is lightly washed and then dried it will shrink to give a worn, lived-in look. This technique can vary significantly, from the whole jacket being heavily shrunk and creased to just a slight creasing effect on the seams. This technique is normally combined with some hand waxing, particularly on the seams, to bring out different effect and colour variations. 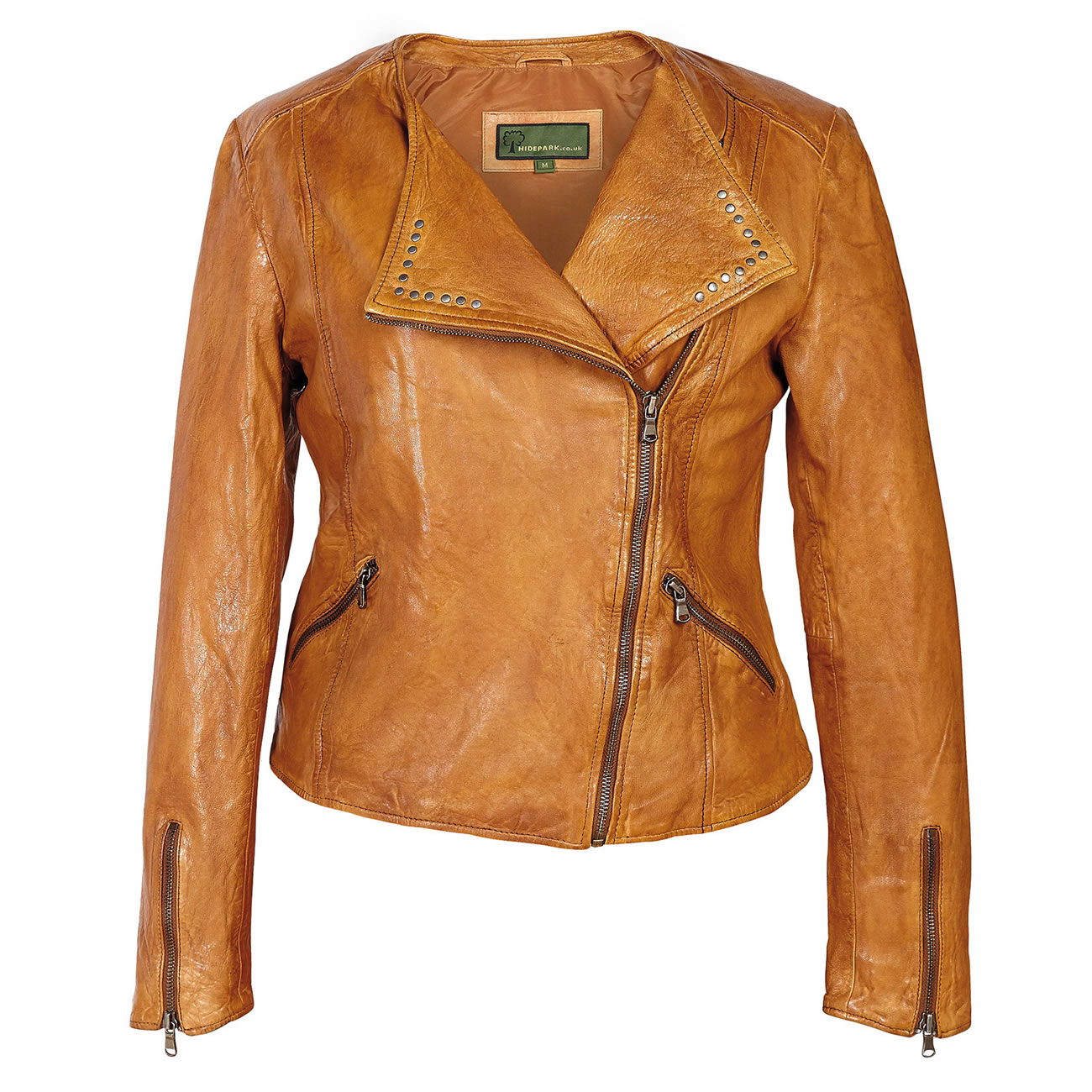 Sometimes referred to as waxed or oiled leather, this finish produces a look that changes as the garment is worn. It’s so named because of the way the base colour shows through when the leather is stretched or pulled. The material starts as a piece of normal nubuck leather (cow or buffalo hide is normally best) that is then coated with a wax that is normally darker in shade. After applying some heat to make sure the wax has penetrated the surface, it looks more like Nappa.

When the leather is pulled or stretched the base colour shows through, giving a two-tone effect. If the surface is subsequently rubbed, it reverts back to the original colour.

This type of finish is normally produced from Nappa leather and involves pressing an embossed metal plate onto the material to transfer the embossed pattern on the plate onto the leather.

It is generally done for two reasons:

Hides from any bovine animal have to be split to reduce the thickness before they can be used for the production of any leather article, whether it’s upholstery or handbags. Several “splits” can be produced from one skin.

The splits taken off are a low-grade skin with a rough “suede” finish on both sides. This is mostly used in protective clothing such as welding aprons and gloves, but can have a pigment spray applied and be used in lower quality upholstery and garments.

The split taken from a goat or sheep skin is what we would know as chamois or shammy leather and be familiar to people who’ve used it for drying cars.

If the skin is tanned without the wool first being removed, the finished article is referred to as sheepskin or shearling. The word ‘shearling’ is also given to a lamb before it has been sheared for the first time. Traditionally these animals would have been the source of the skin, however, it is not always the case nowadays, as the wool is clipped after tanning to produce a very even length normally between 8 and 12 mm. The wool is normally straight but can be brushed to produce a tight or loose curl as required.

The side of the skin that does not have the wool on (the inner layer of the animal’s hide) will have a suede finish. It is possible to dye this any colour required, and the wool the same or a different colour. 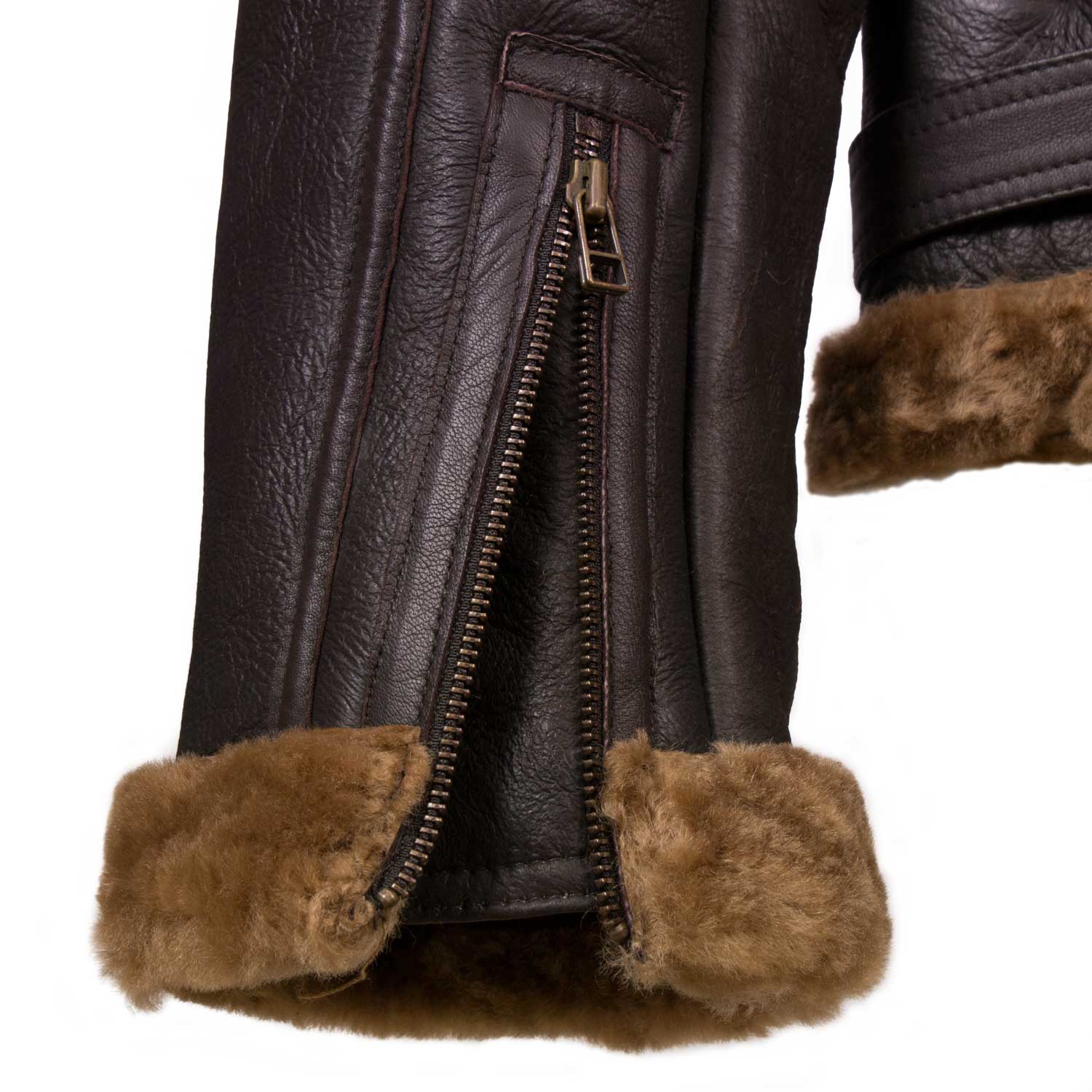 If the suede is sprayed with a pigment dye it produces a finish known as Nappalan. This is the traditional sheepskin flying jacket finish, pictured above. It makes the skin more water resistant and easier to keep clean, but will wear off after time.